Origins of the Village of Waterford Through 1845

Many books have been written exploring the geological and political origins of Wisconsin. Here is a brief synopsis of events that lead up to the establishment of the area now known as the Village of Waterford – much of it written in The History of Racine and Kenosha Counties, published in 18791..  Other resources were consulted to enhance the surrounding events.

1809 – A new territory of Illinois was established which included Wisconsin.

1833 – Treaty signed with Pottawatomie, Ottawa and Chippewa tribes to cede the now southeast part of Wisconsin in the Michigan Territory to the government. It did not allow for full-scale immigration to this area for three years. During this time, it allowed the Indians to relocate west of the Mississippi River and the government was to survey the land to make it ready for settlement5..

Note: (Ref. 8) The complete treaty can be found at this LINK

April 20, 1836 – Wisconsin is made a territory which also includes the northeast corner of Illinois, Iowa, Minnesota, and part of the Territory of Dakota. The counties established in the territory were Brown, Milwaukee, Iowa, Crawford, Dubuque and Des Moines.

October 1836 – The First Territorial Legislature established 15 counties which included Racine, Walworth, Rock and Jefferson comprising the southeast part of Wisconsin. Iowa was made a separate territory.

They stopped along the way in Lockport, Indiana, staying with friends.  In May, 1836, leaving their wives and a child behind, Barnes and Chapman packed up horses to continue west to this new government Territory of Wisconsin inquiring along the way about the land they were traversing.

In an address before the Old Settlers of Racine County, of which he was a founding member, and as published in the Racine Journal June 8, 1870, it states: “Mr. Chapman of Waterford was the next to address the audience. He described how he came to Racine, poor and unaided he worked his way through to Racine; he pictured Chicago in those days. We of a later date cannot imagine it. Chicago the great and glorious metropolis of the west. A scattered hamlet. It seems impossible that there should be living now a man who had seen the Queen of the west in such humble life. He told of his trouble in getting to Waterford of being lost on the prairie and camping out overnight of two days travel to reach that spot. Two hours suffices now. ”

Previous authors have written that the pair probably stopped at Jambeau’s Trading Post in Skunk Grove, just west of the Racine settlement, to make inquiries about suitable waterpower in the area. They were told to follow the Indian trail they were already on – about a two day’s ride west. There, they came across the Pishtaka River and decided to stay since it had great potential for development. A story is written about Barnes and Chapman, spending the night by the river, now known as the Fox River, where upon waking, they discovered their head bandanas missing, apparently taken by mischievous Indians. Barnes, declared that it was a sign from God that this would be the place to settle5..

Early settlers, Levi Godfrey and John Wade, preceded them about six months earlier to about a mile down the river, in today’s Village of Rochester, to harness the power at that point.

Chapman and Barnes would “stake their claim” of 160 acres each, using a pocket compass, pacing, and an axe to blaze the marker trees while carving their names and date on the corners. A small cabin was required to hold a legal claim. It was a crude documentation method but claim overlaps were usually worked out without litigation. After “staking their claim,” Chapman and Barnes returned to Lockport to retrieve their families.

The word ‘claim’ was used by pioneers to denominate both the tract of land selected and the right to hold the tract. Interference with rightful claims was termed ‘jumping’ and claim-jumpers were looked upon with abhorrence by all good citizens. It was deemed extremely hazardous as well as highly dishonorable for a speculator or stranger to bid on a claim even though it was not protected by a ‘pre-emption’ right. More than one ‘war’ was waged when such attempts as that were made, almost invariably resulting in the rout(sic) of the interloper. Blood, in some instances, was shed in defense of their recognized rights.1.

1837 – During the time Chapman and Barnes were gone to reunite with family, a “Mr. Beebe” made claim to the water power and built a shanty. Upon his return, Chapman bought the rights from him for a reported $7001..  As his first settlement project, Chapman, with the assistance of eight other local farmers, dammed the river and built a sawmill in the Fall. Lumber was needed to build dwellings and business buildings. Wood was very plentiful and the land needed clearing to grow crops. An excerpt from  “The letters of Edwin Bottomley, 1842 – 1850” 12  tells of the logging activity using the Fox River for the conveyance of timber.

“…and in proof of which I can state that theire (sic) are no less than 4000 logs lying at the sawmills of Waterford and Rochester, and in the river ready for rafting down when the ice breaks up and the greatest part of these have been cut from Government land.”

January 2, 1838 – The territorial legislature splits up Racine County into townships with no special reason other than local advantage and convenience1.. Township 4 became the Town of Rochester.

1839 – A flour mill with a 22-inch stone was built next to the sawmill. It would become Chapman’s primary business for most of his life while continuing to practice law.

The Great Land Sale of 1839, which Congress authorized to allow people to buy government land for $1.25 per acre, put many in a frenzy. Initial ownership of the land by a private individual was called a Land Patent, meaning “the first.” The Government Land Office was opened in Milwaukee to auction off land in the territory. Bidders had to be there in person or have a representative agent buy the parcel when it came up for sale.

The process began with an announcement made from the steps of the courthouse stating which parcels were being offered for sale. There was no pre-emptive provision in the law that protected the settlers’ rights, some of whom had invested all their money and work into developing a farm which vastly increased its value. But, they may have become land rich and cash poor. Settlers were required to pay cash to buy the property that they had already claimed.

It was common to use an agent, or representative, to buy the property, and he in turn, might sell it back to the settler at an inflated price of two times or more, plus a bond with interest not uncommonly set at 12 to 25 percent or more. Some of the settlers appointed another trusted settler to speak up for them to make the claim, but, at the end of the day’s auction, they still needed the money to pay for the land.

If the settler wasn’t there to claim his piece of property, a speculator quickly spoke up. This intrusion would not be treated kindly. At times, it was a raucous event since there was a lot of speculation and prices could skyrocket. Several written accounts relay incidents of speculators getting physically assaulted then carried out on the shoulders of concerned settlers and dumped in the street.

The auction process went on for quite some time. The hospitality business was running wide open with settlers eager to learn when their property would come up for bid. Purchasing the land would end their fears of losing their land to a claim jumper or speculator. It was an anxious time for all the settlers that took a chance to develop some land which legally wasn’t theirs until it was purchased from the government.

March 9, 1839 – Chapman and Barnes hired Eliphalet Cramer, of Milwaukee, to be their agent. Cramer was a wealthy gentleman and venture capitalist. He reportedly had impeccable credentials as evidenced by his affiliation with various businesses, a hospital, and lending banks. He too emigrated from Waterford, New York. Cramer paid $400 for the 320 acres and transferred the deed with a mortgage to Chapman and Barnes for $1,200. Today, this would be the approximate area bounded by Center Street (west) to Milwaukee Street (east) and St. Thomas Cemetery/Whitford Park (south) and Oak Lodge (north – near Harbor Heights subdivision). 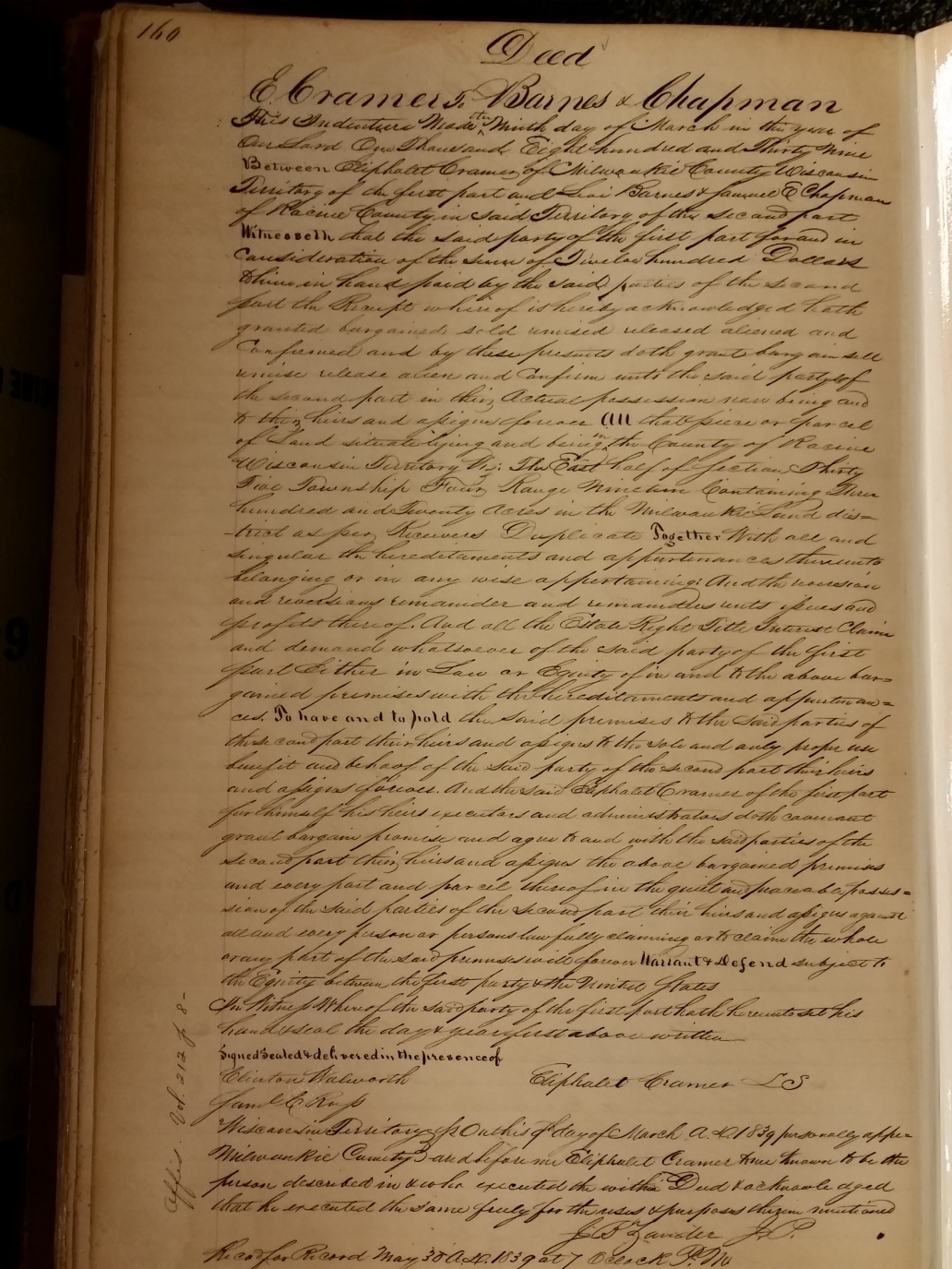 The minimum size land patent available at the time was 80 acres, one half of a quarter section. Barnes and Chapman wanted the east half section 35 of Township 4, Range 19. The township established in the county of Racine, known as Township 4, would become the Town of Rochester.

December 10, 1840 – Land patents were signed by President Martin Van Buren naming Cramer as the owner, even though he acted as agent for the others as well as his own interest. When he spoke for the land, he purchased a total of 14 land patents totaling 1,788 acres in Township 4 of Racine County for $2,235. (ref. 9.) 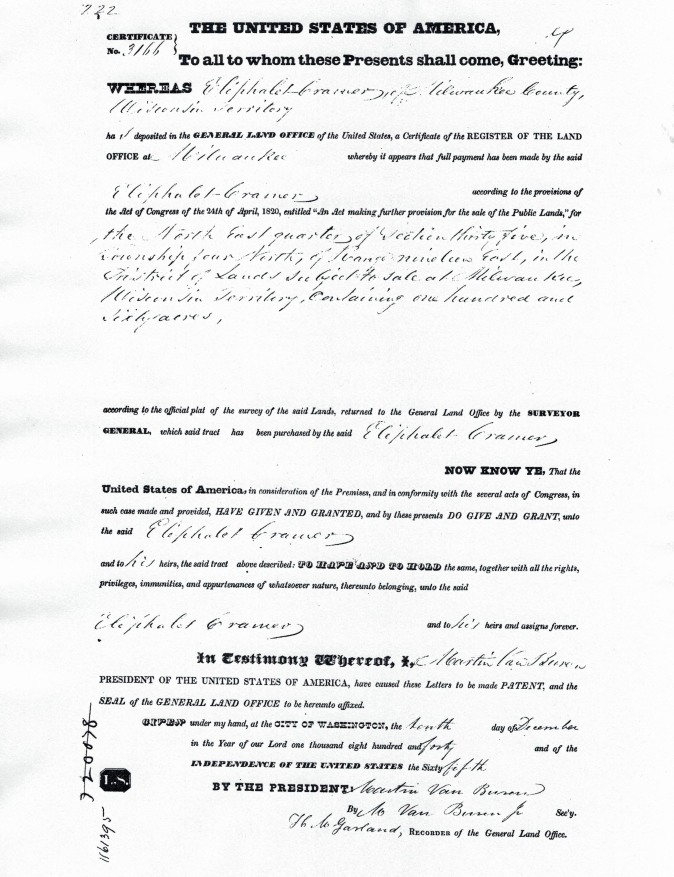 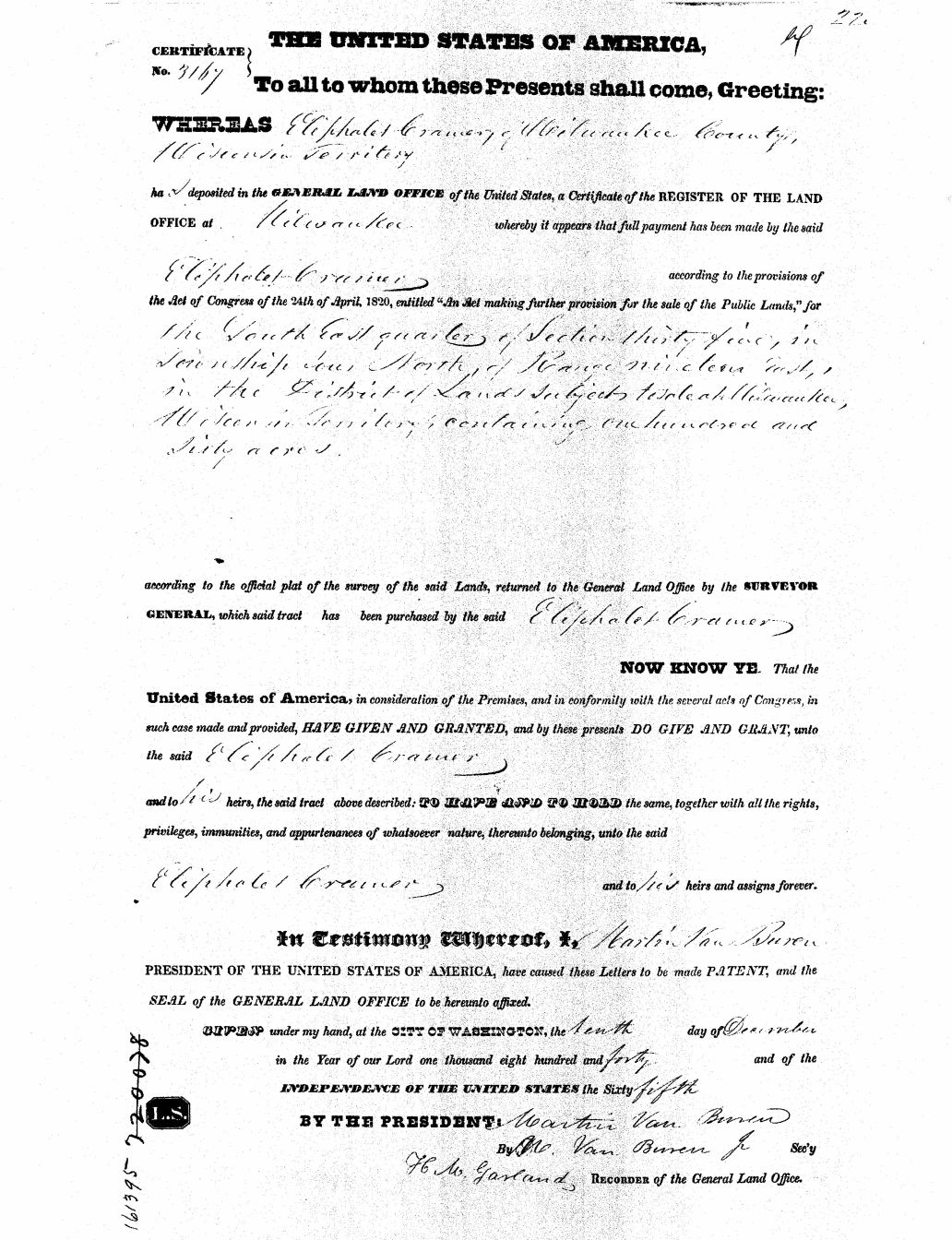 September 1842 – The village is surveyed by Moses Vilas, County Surveyor for Russ. It was notarized and filed by Chapman, Justice of the Peace, December 2, 1842.  Streets and block numbers were assigned to “The Village of Waterford”.

It is the author’s opinion that it would be mere coincidence or a product of folklore that Waterford would be named for a narrow spot in the river where it was “easy to ford,” or, crossover. Since all three parties of this transaction, Cramer, Barnes and Chapman, were from the Waterford, New York area, it seems reasonable for them to name the new village “Waterford”, a common practice of the settlers naming their settlements after the area from which them came.4. This is confirmed in several additional documents.6, 10, 11

February 1843 – Twelve more blocks were added to the original survey. Note the location of Old Settler’s Cemetery on Jefferson St.. The lot numbers in a number of blocks were re-surveyed to a larger area, i.e.: Block 8, 11, and 15.

Additions made to 1842 Survey – Map Only

April 25, 1845 – Final additions were made to the survey and remained that way for many years.

January 18, 1847 – The Territorial Legislature is petitioned to form the Town of Waterford. This would separate the town from the Town of Rochester. (Document courtesy of Burlington Historical Society)

Plank Road from Racine to Rochester:

(A replica of this type of road can be seen at the Wade House,  a Wisconsin History site in Plymouth, Wisc. on Hwy. 23.)

Excerpts from An English Settler in Pioneer Wisconsin – Letters of Edwin Bottomley, 1842 -1850, published by WHS in 1915 (settled in the English Settlement area just southeast of Waterford):

Lightning referred to as Electrical Fluid

Reference to estimation of 4,000 logs in the river rafting at sawmills in Waterford and Rochester

The complete book of Edwin Bottomley’s letters can be accessed by clicking on the reference #12 link below.

From this point in time, click on the MAIN MENU  to follow the development of individual properties.

12. An English Settler in Pioneer Wisconsin – Letters of Edwin Bottomley, 1842 -1850, published by WHS in 1915. Archived at: http://www.archive.org/stream/englishsettlerin00bottrich#page/n7/mode/2up