The original Chapman Building was located on the right side. 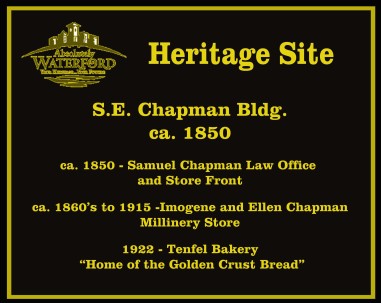 Just to the right of this building, and in the middle of North River Street, ca. 1850, stood the Chapman Building.

Samuel Chapman, one of Waterford’s founders, built a two-story storefront building out of limestone and field stone that was taken from the river just north of the Waterford dam.

As detailed in EARLY HISTORY, the original land patent for the eastern half of Section 35 was purchased by Eliphalet Cramer, in 1839, a Milwaukee businessman and financier, on behalf of Chapman and his father-in-law, Levi Barnes.  In 1842 a large piece of this land was sold to Chapman’s brother-in-law, Sam Russ, which he would have surveyed and made into the original village lots. The lot on which the original stone Chapman building stood was not on the original survey of 1842 nor the 1843 addition.  It was added to the April 5, 1845 survey as a 23-foot, wide strip which was subsequently purchased by Chapman.  This narrowed North River Street to just 43 feet.  All of the other cross streets are 66 feet wide. With the power of the original pioneer, the author supposes  that Chapman wanted a commercial presence on Main Street in order to operate his mill business and law practice. 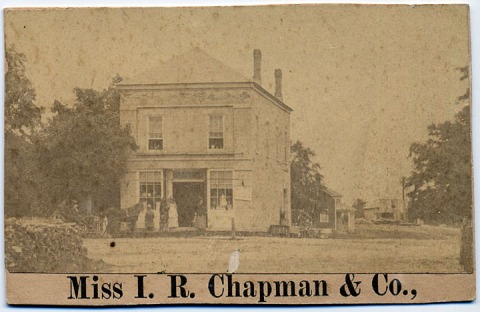 Chapman located his law office on the second floor.  In the early 1870s, his daughters, Imogene and Ellen opened and operated a millinery store on the first floor. The sisters ran their establishment for 42 years until a few years before Imogene’s death in 1915.

It is unknown when the Chapman Millinery Store moved to the building next door to the west, which is now occupied by Absolutely Waterford.

‘Home of the Golden Crust Bread’

In 1922, Frank Tenfel, a 26-year-old German immigrant trained as a baker, bought the building, remodeled the first floor and built a bakery operation that would eventually serve the surrounding community in a radius of about 20 miles. The bakery’s motto, “Home of the Golden Crust Bread”, attested to its success by producing 1,200 loaves of bread, 225 dozen rolls, 200 coffee cakes, and 50 pies on Saturdays. Click HERE to learn more about the Tenfel Bakery.

1920s Fourth of July Parade passing by the Chapman Building

In addition to the aforementioned businesses, this building served many purposes, including, use as Charles Chapman’s family residence, a Masonic Lodge, an ice cream  parlor, a shoe shop, a junk store, a tin shop, the local post office, headquarters for the Waterford Post newspaper, and the H. Buge Drug Store.

The approximately 120-year-old building was razed in 1968 to widen North River Street to its present width, 66 feet., consistent with the other village side streets.

The current occupant of this building is CREAM CITY CRATES, a small business specializing in custom gifts. Check them out at this LINK, or on Facebook

NOTE: Should the reader have further documentation to enhance the content of this web page, please contact the Lead Researcher through Absolutely Waterford.  We are particularly interested in pictures or historic artifacts that may be shared.  Credit will be given.