Purpose of this Site

As time marches on, people age, memories fade and stories are lost. Pictures, which are a snapshot in time, are put into boxes or discarded.  The resources become scattered and hard to research – and sadly, our history is lost as a result. This group of dedicated volunteers, who make up the amateur historian group within the Explore Waterford (formerly Absolutely Waterford) Design Committee, has spent thousands of hours attempting to gather relevant artifacts of Waterford’s past and preserve them at one location for current and future generations to enjoy.  The Waterford Public Library will be the repository for all research materials, in digital format, for future history buffs to make new contributions.

There is much more information available in the digital format than is published on this website.  It is intended to be a living and growing work, so check back occasionally to see if more information has been added as it is uncovered.  Each page will list a lead researcher so that email contact can be made through director@ExploreWaterford.com for additions or comments.

Do not let our history be buried in a box somewhere in the corner of your basement. If you have something to share, we can scan photos and documents if you want to keep the originals. Also consider donating historical photos to the Waterford Public Library where they will be archived for future generations in the Digital Collection, sponsored by the University of Wisconsin and Wisconsin Historical Society. If you have a passion for local history, consider joining our committee. Contact Tanya Maney, Executive Director of Explore Waterford, (formerly Absolutely Waterford):  director@ExploreWaterford.com for contact information.

Judy Gambrel is originally from Chicago but splits her time between her Waterford home and her business in Rockford, Illinois. Her Rockford home is in an 850,000-square-foot former hardware factory built in 1910. She and her late husband made a 10,000-square-foot apartment turned museum. Judy’s collection boasts original WWI posters and patriotic memorabilia. Her building also includes a general store, hardware store, music store and her husband’s antique tool museum. Judy was also on Rockford’s local history museum board for eight years.

Because of her love of antiques and history, someone informed the producers of the History Channel’s hit show American Pickers about her “museum” and she and her collections were featured on two episodes.

Judy has been a genealogist for more than 20 years and has written several family history books, including a 750-page book about her Norwegian ancestors who settled in Deerfield and Cambridge. She also wrote a 650-page book about her late husband’s family with seven ancestors who fought in the American Revolution. Most recently, Judy has led regular classes on genealogy at Waterford Public Library.

Since 2015, she has shared her enthusiasm and talents with Explore Waterford. As a long-time history buff who has conducted many hours of research and written books on a variety of historical topics, she decided to focus on Waterford’s beginnings. Her most recent book is about the historic Fox River Hotel, which today houses Café 213 and Rendezvous Jewelers.

As an EW volunteer, Judy made the first substantial gift toward the Strand Theater Curtain restoration project, the historic curtain that now hangs proudly in the library. She has recently formed a Design sub-committee that is developing collection protocol, and conducting oral history interviews with Waterford residents and business owners.

Robert Gariepy, Sr., better known as “Bob,” is a retired electrical engineer after working in the industry for nearly 50 years. Bob grew up in the Keweenaw of Michigan’s Upper Peninsula, known for its rich history in copper mining. The area once bustling with industry has strongly influenced his fascination for the historic origins of places.

After retirement, this interest deepened when he started working on family genealogy. As his research continued, he produced an 85-page book titled “What Was it Like when You Grew Up in the Olden Days, Grandpa?” as well as a 90-page family genealogy binder. Additionally, Bob has written many technical articles and training materials throughout his career, including a 485-page textbook “The Underground Installer.”

As an active member of St. Thomas Aquinas parish, Bob has also dug into the history of the parish. He was prompted to find its origins since there was mostly anecdotal rather than factual evidence available. His passion for the past is also evidenced in local parades as he pulls his 1921 Cadillac that he proudly restored into an electric line truck of the era.

After joining the Absolutely Waterford Design Committee in 2014, his work focused on documenting the origins of the oldest buildings and sites in the Village of Waterford. During EW events, he may be found impersonating Waterford’s founder Samuel E. Chapman, whom he has done extensive research on, to educate the public about local history. He was honored as a 2016 Wisconsin Main Street Volunteer of the Year.  He is also responsible for the development of this website.

Maureen Vander Sanden is a graduate from Waterford Union High School and resident of the community for more than 25 years.

She carries a BA in Journalism and Mass Communications from University of Wisconsin-Milwaukee and has worked several years as a community editor, covering local government, business, crime and special events.

Throughout her years of reporting, she dedicated much of her published works to her interests in local history, antiques, landmarks, historic initiatives and celebrations.

Her volunteer work in the area of preservation began in 2011 when she led the Walworth County Historical Society in launching its social media program, which coincided with her continuing studies through UWM.

Maureen began working with Absolutely Waterford in 2012 as a member of the Design Committee. Her focus has been researching history of local businesses and making connections between the past and present. The results can be seen through her writing for the Heritage Sites Walking Tour.

“One thing our charming, cozy town is missing that so many other small towns offer, is an historic walking tour. I am very passionate about sharing Waterford’s rich history to residents and visitors by helping to bring to fruition the village’s own self-guided walk through the past,” she said.

During her visits to Main Street communities throughout the country, she and her husband make a point to learn about each town’s past, staying at historic inns or bed and breakfasts, touring old mansions, museums and lighthouses, while shopping and dining locally.

Elizabeth, aka. Liz, Gamble was born and grew up in the idyllic small town of Oregon, Illinois, the county seat of Ogle County. The rich local history of her hometown greatly contributed to her deep interest of the past. Surrounded by three state parks, one of which contains the second-largest concrete monolithic statue in the world, the Eternal Indian, more commonly known as Blackhawk Statue, overlooking the Rock River and the community of Oregon, was a driving force in this interest. Her grandfather and uncle worked on its construction in 1910, making her proud of this connection to local history.

She has been researching family history for more than 25 years, and is now a proud member of Daughters of the American Revolution. She has produced a two-volume book set, “John L. & Ruth A. Gamble Family History” as well as a compilation of the letters her Uncle Hank had mailed to her Aunt Henrietta while he was serving in North Africa and Italy during World War II.

She carries a BA in History from Carroll College and her MA in Education with Teaching from Aurora University. She is currently a Substitute Teacher at Waterford Union High School.

Since becoming a member of Absolutely Waterford’s Heritage Committee several years ago, she has used her researching abilities to garner information and published two books, “The History of Education in the Waterford Area” and “The History of Waterford Through Maps”.

She continues to engage residents and visitors through WATERFORD MEMORIES, a public Facebook page she created and administers. “It helps bring forth those who may otherwise slip through the cracks and whose historical memories would otherwise be lost forever,” she stated. 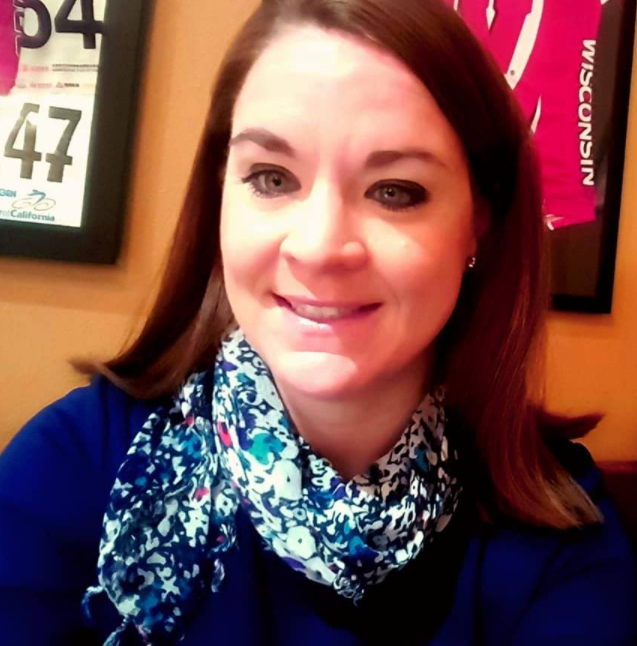 Angionette, a.k.a. (Ang), Hansen moved to Waterford with her husband and daughter in 2017. Since childhood, Ang has had a passion for environmental stewardship and sustainability. She has always been cleaning up trash in the areas she has lived and quickly saw the need in Waterford too. She immediately reached out to the Chamber of Commerce to try to plan a community wide event where she was welcomed into Absolutely Waterford (now Explore Waterford) and the Heritage Design Committee.

In 2018, Waterford celebrated their First Annual Beautification Day along the Seven Waters Bike Trail. Residents gathered and collected over 30 bags of trash that first year, and over 60 the next. In the third year, the clean-up efforts extended to Tichigan.  Angionette looks forward to growing Beautification Day to include area businesses and other communities as well.

During the day Angionette works as an HVAC Account Manager at Johnson Controls and mother to Natalee. Her free time is most likely spent with her family outside biking, hiking, camping, and kayaking.

Help Angionette keep Waterford beautiful and engage with her and other Waterford residents through WaterfordWIBeautification, a public Facebook page she created and administers.

As past Waterford Post editor/owner, Ed Malone, put it in his post on April 22, 1920 “Residents sometimes lose civic pride, but a stranger will always judge a town and its citizens by what he sees.”

2 thoughts on “ABOUT US”